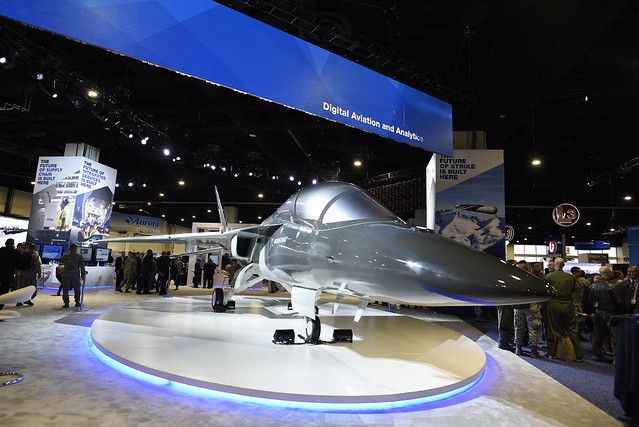 Exhibiting at AFA's annual Air, Space & Cyber Conference is the ideal opportunity to showcase your latest developments in air, space and cyber capabilities vital to the Air Force Mission.

Over 12,000 people registered for the 2018 Air, Space & Cyber Conference and Technology Exposition including top decision makers from the Air Force. The 2018 conference broke records for attendance and we fully expect another record-breaking crowd this fall.

Other past attendees have included the majority of 4-, 3-, and 2-star Air Force generals, commanders from all 10 Air Force major commands, and various high ranking officials from the Deparment of Defense including the Secretary of Defense.

The Air, Space & Cyber Conference boasts more than 100,000 square feet of space allowing more than 140 companies to showcase the latest air, space, and cyber capabilities. Over the course of this three-day event, the exhibition schedule provides more than 21 hours of exhibit time, approximately half of which are non-compete hours. There are also two very popular and well-attended receptions for exhibitors and Air Force leaders to network and exchange ideas.

To evaluate the caliber of the conference, view the 2018 Air, Space & Cyber Program Guide which will provide the following valuable information:

Become an Exhibitor Become a Sponsor

Who is eligible to exhibit and sponsor?

AFA welcomes companies of all sizes to exhibit and sponsor at the Air, Space & Cyber Conference. We want our industry partners to be actively engaged with AFA members throughout the year which is why Corporate Membership is required to exhibit or sponsor at the conference. Corporate Membership provides numerous opportunities to bring your products, services, thought leadership, and programs to the attention of Air Force decision makers and helps AFA continue its mission of promoting a dominant United States Air Force. If you are not yet a Corporate Member please contact Fred Ullman at 703-247-5842 or fullman@afa.org.